In 2017, Truth Initiative® released a report highlighting a collection of states with smoking rates that rival the most cigarette-dependent countries on earth. These states, termed “Tobacco Nation,” have not only the nation’s highest adult smoking rates and poorer health outcomes compared with the U.S. as a whole, they also have largely failed to enact public health policies that could lessen their dependence on tobacco. In “Tobacco Nation: The Deadly State of Smoking Disparity in the United States,“ we argued that the lack of tobacco control policies exacerbated smoking rates and other health risks, and called for a set of policy actions that could help loosen the grip of tobacco on these communities. Those smoking rates place Tobacco Nation alongside the most tobacco-affected countries in the world. When compared to the Bloomberg Initiative’s 10 countries with the highest rates of tobacco use (China, Indonesia, Vietnam, Philippines, Brazil, Ukraine, Mexico, Bangladesh, Pakistan, India), Tobacco Nation has the fourth-highest rate of youth smoking (12 percent), behind only Indonesia (20 percent), Ukraine (15 percent) and Mexico (15 percent). The Philippines, Brazil, Pakistan, China, India, Vietnam and Bangladesh all had lower youth cigarette smoking rates. Adult smoking prevalence rates are not much better. Tobacco Nation has the fifth-highest rate (22 percent), behind only Indonesia (35 percent), Ukraine (29 percent), China (28 percent) and the Philippines (23 percent). Facing poorer health and financial outcomes, Tobacco Nation states would benefit from comprehensive tobacco control policies. Yet the region is far less likely than other states to implement such policies. Lower taxes are levied on cigarettes, fewer Tobacco Nation states have raised the cigarette purchasing age to 21 and only two states in Tobacco Nation have laws forbidding smoking in workplaces, restaurants and bars.

Although the tobacco policy framework is currently lacking in much of Tobacco Nation, its residents favor policies that can make a difference in winning the war against tobacco. Truth Initiative conducted a survey to assess support for a number of tobacco control policy ideas, both in and outside of Tobacco Nation. We found that support did not differ between residents of Tobacco Nation and those in other states, and in fact, in some cases support for these policies was higher.

The survey used Lightspeed GMI’s online panel and was sponsored by RTI, an independent, not-for-profit research organization. Truth Initiative then analyzed the survey data using statistical methods to ensure that the survey was nationally representative and accurately represented the demographics and smoking characteristics of both Tobacco Nation and the remaining U.S. states (excluding Hawaii and Alaska). The survey was conducted from Dec. 14 and Dec. 19, 2017, with 1,601 participants.

Regardless of geography, the majority of survey participants favored several evidence-based policies.

Two-thirds to three-quarters of participants in both groups supported, or were neutral about, flavor and menthol bans, showing that the majority do not oppose the policy. Most are supportive — one half of both groups support menthol and flavor bans. Of those not declaring outright support, one-quarter to one-third were neutral to these policies, suggesting that they could be open to the idea of a flavor or menthol ban. San Francisco recently proved that public support can advance policy. In the city, 68 percent of residents voted to uphold a ban on both flavors and menthol tobacco products, despite the tobacco industry spending millions of dollars in opposition.

In San Francisco, 68% of residents voted to uphold a ban on both flavors and menthol tobacco products.

While the Food and Drug Administration announced in November 2018 that that they are going to propose a rule to restrict menthol cigarettes and flavored cigars, any action from the agency could take many years. In the meantime, state and local entities can, and should, continue to protect their citizens by enacting such sales restrictions.

No single public policy will end the scourge of tobacco use. But as the experience in the rest of the U.S. has shown, a comprehensive slate of tobacco control policies can make a significant difference in winning the war against tobacco. A region that smokes far more packs of cigarettes per year than the rest of the country would undoubtedly benefit from policies that increase the price of cigarettes and make it harder for young people to buy them. A large section of the country unprotected by the smoke-free laws enjoyed by most of the rest of the U.S. stands to gain cleaner air, improvements in health and a potential reduction in tobacco use.

In addition to the policy items suggested in the survey, the actions we called for in our previous report remain critically important. Higher taxes on cigarettes, comprehensive smoke-free laws, tobacco-related public education, increased public and private funding to combat tobacco use, quitting services and point-of-sale regulations that restrict youth access to tobacco products and marketing all play a key role in putting an end to the tobacco epidemic.

It is clear that Tobacco Nation does not have to and should not endure the status quo. Tobacco Nation residents want to be protected by practical tobacco control policies. While many leaders may have reluctance to enact these common sense measures, their constituents do not. Now is the time to educate elected representatives and other state and local leaders about these policies and the public support behind them. We must work to ensure that, regardless of where people live, they can be free from the negative health consequences of tobacco.

Tobacco Nation: The deadly state of smoking disparity in the U.S.

More in smoking by region 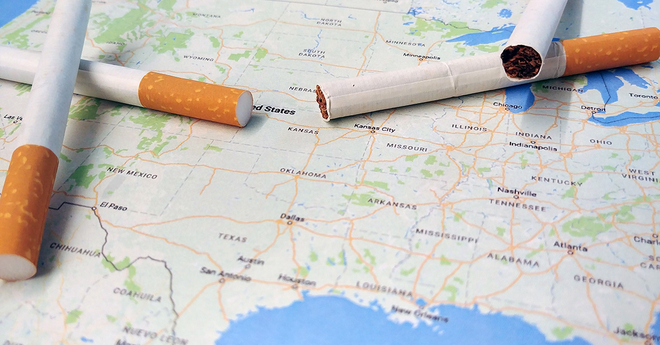 What is your state doing about tobacco?

Tobacco use in New Jersey 2019